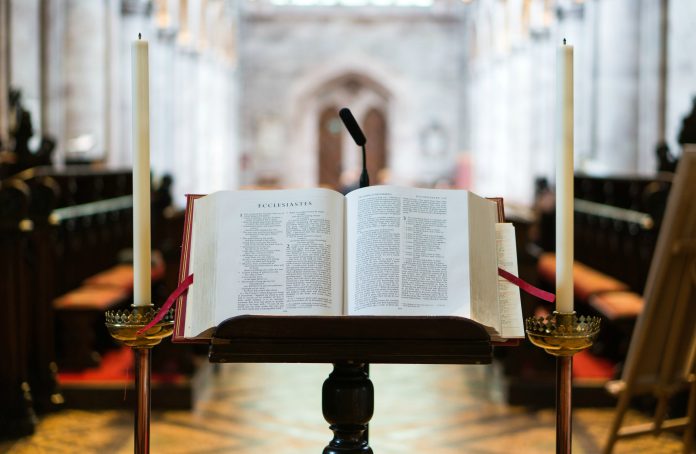 The Most Holy Trinity—Father, Son, and Holy Spirit—is a profound mystery. Many preachers and teachers have shied away from offering a few words on this mystery for fear that they preach heresy or lead others into heresy by their words.

During the Mass of the Solemnity of the Most Holy Trinity, Bishops have often been kind to their clergy in the past by offering a Pastoral Letter to be read on that Sunday—thus freeing them from the obligation to preach on this Mystery. This year however…no such joy. There should have been a Pastoral Letter to read last week but I forgot all about it! It had been my hope to print it and include it in the bulletin for this Sunday (so that they could read it during the sermon) but alas I forgot that too. So, I’d trapped myself into a corner; I was left with no choice but to dangerously walk the line between orthodoxy and heresy.

I started confidently like this, “We celebrate the Holy Trinity, that is to say, we believe in ONE GOD.” So far, so good.

I went on, “We say this each week as we recite the Creed. We do not believe in THREE GODS. We do, however, believe that this ONE GOD has chosen to reveal Himself in the THREE PERSONS of the Trinity—Father, Son and Holy Spirit. Neither Person of the Trinity is the same, yet all THREE are ONE GOD. For you math teachers out there, I’m sorry to disappoint you but THREE into ONE does go (even if the analogy is a bit limited).”

Looking around and seeing that no mob was coming to seize me, I, having gained a little more confidence, carried on: “Today we reflect on the Mystery of the Trinity—the life of God the Father, God the Son, and God the Holy Spirit. It is a relationship that we as members of the Church are called into. We are called to share the very life of God. We are called to live in community; the community of our Holy Mother the Church.

In today’s Gospel, we hear the invitation of Our Lord to make disciples of all the nations—to baptize in the name of the Father, the Son, and the Holy Spirit—to call others into the life of grace, and to share communion with the Triune Godhead.”

It was then that a sudden flash of inspiration hit me (in truth, I’d had the inspiration as I was writing my notes beforehand, but it makes the story sound better this way):

I have sometimes read horror stories of Father Trendy Lefty who—in an attempt to be more pastoral and meaningful to the people—has changed the words to be used in the celebration of the sacraments and ‘baptised’ people in the name of the Creator, the Redeemer and the Sanctifier. This may be from a misguided pastoral approach but, unfortunately, the person has not been baptized, as Holy Mother Church gives us the form of words we should use for the celebration of Her Sacraments.

You may ask why is Father getting so het up about a form of words? But let’s look at this logically for a moment.

Let’s assume that little Johnny was taken to the parish church for baptism. He is ‘baptised’ in the name of the Creator, Redeemer and Sanctifier by the priest—as he thought it would be more pastoral and meaningful to the congregation. The end result is this baptism is invalid. it will also mean that little Johnny’s Confirmation will be invalid too. Now, let’s suppose that little Johnny has a vocation to the Priesthood and is eventually ‘ordained’ a priest, because of his invalid baptism it means that his ordination is invalid. This means he can say what he wants at the altar over the bread and wine—they’re never going to change into the Body and Blood of our Lord no matter how hard he huffs and puffs because his ordination is invalid. Moreoever, the many sins he ‘forgave’ in the Confessional are not forgiven as his ordination was invalid. The many sick people he anointed were not anointed, as—you guessed it—his ordination was invalid. And all of this down to Father Trendy Lefty who didn’t follow the rites of our Holy Mother the Church in administering the Sacrament of Baptism.

Continuing on, I said: “God has revealed Himself to us as Father, Son, and Holy Spirit. We are called to share in His Divine life so that, one day, we can be found worthy of a place in heaven. May we worship Him here on earth so as to attain a place in heaven.”

Then, looking around and seeing I’d made it out alive, I decided to move the proceedings on: “Glory be to the Father and to the Son and to the Holy Spirit as it was in the beginning is now and ever shall be, world without end. Amen.”

Next year, I think I’ll just read the Pastoral Letter.