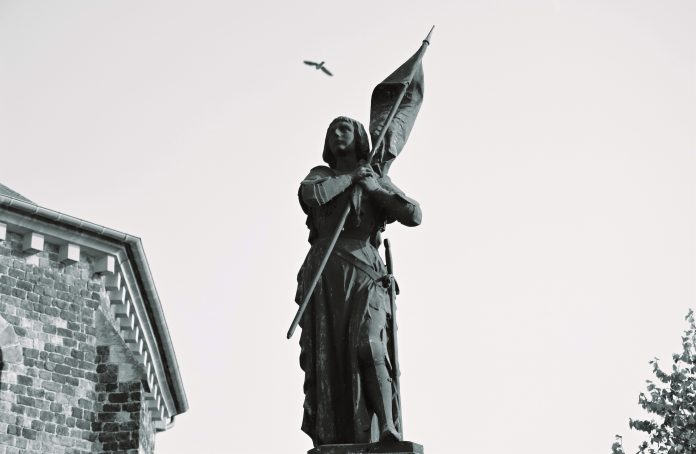 On 30th May 1431 an illiterate peasant girl from the small, simple town of Domremy in Northeastern France was put to death by burning. This petite young woman was St Joan of Arc (Jeanne d’Arc in French). But why was St Joan of Arc burned to death?

Any biography of Joan of Arc will inform you that her appearance onto the scene of the Hundred Years’ War in 1429 caused an uproar in Western Europe. She was loved by the French who were loyal to the Dauphin Charles VII, admired by other Europeans such as the Italian poet Christine de Pizan, and hated by the Burgundians and the English.

It could be said that, in some sense, she was the marmite of the 15th Century. Depending on who you were (and whose side you were on), you either loved or loathed her.

Even for some of the French social elites who were on her side politically, she proved somewhat of a difficulty. Being a peasant farming girl with no military experience, she undoubtedly had her own skeptics even among those loyal to Charles VII.

However, despite her haters and skeptics, Joan of Arc was undoubtedly successful. And, due to the fact that her claim of being sent by God had been thoroughly tested by French theologians loyal to Charles VII, and found worthy of belief, all of this success was interpreted as proof that God was on the side of the French against the English.

And so, when the Burgundians captured her during the siege of Compiègne on 23rd May 1430, they quickly handed her over to the English who were quite keen on ruining her reputation and showing the world that she was, in actual fact, inspired by Satan.

Back in the previous summer on 17th July 1429, Charles VII’s coronation was made possible by God through Joan’s efforts. The English, in trying to ruin Joan’s reputation was, therefore, trying to show that King Charles II’s crown was actually received from Satan.

The English put Joan through a trial led by the pro-English bishop, Pierre Cauchon. Pierre, alongside other pro-English cronies, leveled all kinds of false charges against Joan. In typical deceitful fashion, they distorted facts and used them against her.

For example, they interpreted her wearing of protective armor as cross-dressing, her visions of saints as visions of demons, her jumping from a tower to try and save a French village as a possible suicide attempt, and her refusal to submit to them as refusing to submit to Jesus Christ Himself.

Despite all these accusations it was, believe it or not, the charge of cross-dressing that was ultimately the reason why she was burnt at the stake. And how old was Joan of Arc when she died? Just 19.

Repeated heresy was a capital crime in the 15th Century. In Joan’s case, cross-dressing was seen as that heresy. This was in contradiction to the fact that St Thomas Aquinas, in his work Summa Theologica written about 160 years before, explained that necessity would be a permissible reason for cross-dressing.

Despite this, Pierre Cauchon and his men interpreted Joan’s wearing male armor in order to protect herself from rape and assault as cross-dressing—that was strike 1 on the heresy charge. They only needed her to repeat that “heresy” once more in order to sentence her to death.

They did this, first of all, by threatening to torture her. After this didn’t work, they woke her up one morning and threatened to burn her alive.

She recanted at that moment out of fear and, without knowing what she was doing, signed a paper that said her visions were not from God. She also promised to not wear male armor again.

What happens next is then unclear as there are two versions of events.

Joan—according to the testimonies of Friars Martin Ladvenu and Isambart de la Pierre 24 years later at Joan’s rehabilitation trial—had explained that “A great English lord had entered her prison and tried to take her by force.” This was thus the reason she resumed wearing protecting male armor.

Whereas Jean Massieu recalled how Joan’s female dress had been taken by the guards and she was therefore left with nothing else to wear other than her male armor.

In either event (and it is possible both could be true given how treacherous Pierre Cauchon’s scheming was), Joan’s action to put male armor back on was what made her guilty of “repeated heresy”.

Joan, knowing this and also wanting to make amends for accidentally discrediting her visions, simply said, “I would rather do penance once for all—that is die—than endure any longer the suffering of a prison.”

It must be noted, however, that she also said, “If the Judges wish, I will resume a woman’s dress”. But, in regards to their hopes of her denying her visions,  she also said that she could “do no more.” Joan would not deny her visions.

And so it was, firstly and predominantly, her resuming male dress that answers our question, “Why was St Joan of Arc burned to death?”

But it was also, secondly and less importantly, the fact that she seemed to recant her belief in her visions and then, a few days later, recant that recantation.

In summary, Pierre Cauchon and the English were intent on executing her from day one of the trial and exploited any reason they could in doing so.

Saint Joan of Arc, pray for us!