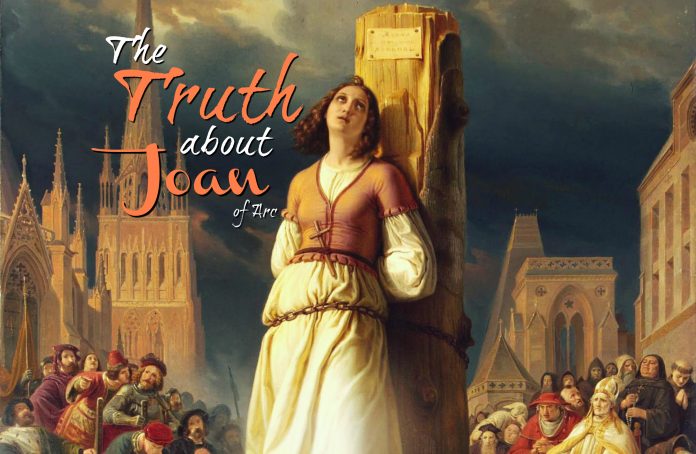 Joan of Arc has always been a slippery individual to define; she was hard to define in the 15th Century and still is today. This fact makes it quite hard to work out what’s true about Joan of Arc and what isn’t.

As rumors fan into flame of a young peasant girl stealthily crossing English-controlled territory, under the cover of nightfall, on a special mission to save the French heir apparent, this romantic (though true) tale seized not only the English with suspicion and trepidation, but also the pens of dreamers and writers from her day to our own.

In our present time, new biographies about her life are written so prolifically that it seems to suggest that each chronicler is totally ignorant of the thousands of biographies that have come before their own.

Perhaps it’s because we’re all subconsciously aware that we’ve never done her tale justice? Each new biography about her tries a new spin—a different angle—to retell the story of the illiterate, young, peasant girl who saved France.

In just 19 years of her short life, Joan of Arc became the eternal enigma that has inspired millions. But, separating fact from fiction, what is the truth about Joan of Arc? Who was Joan of Arc, really?

Will The Real Joan Of Arc Please Stand Up

Given this slippery definition, Joan of Arc has become a darling for many different and often contradictory parties.

She was deeply loved by the French during her brief time with them and, after her death, a Joan lookalike received accolades pretending to be her by claiming that she had escaped the cruel flames that burnt the real Joan’s worn-out body to a crisp.

This money-grabbing deception, it must be noted, was achieved no less with the help of Joan’s own surviving brothers—it appears families really do give birth to both sinners and saints!

Conversely (and understandably), she was loathed by the English of her day. They were the ones—as I’m sure you’ll know—who captured her, falsely accused her of demonic possession, and subsequently burnt her.

Even 160 years later, Shakespeare portrayed her in his history play, Henry VI, as a witch and a whore, in line with the English soldiers during the Siege of Orléans who threw both of these same insults at her (the latter insult making her weep).

However, long before Shakespeare, we see a speck of English decency in the honest observation of one anonymous English soldier who, upon hearing Joan’s torrid screams and repeated invocation of the name of Jesus as she died, lamented these terrible words, “God forgive us: we have burned a saint”.

In present-day secular England, she is superficially admired as a woman of bravery, but the truth about Joan of Arc is not really explored much beyond this point. In fact, it is so unexplored today that hundreds of people google “was Joan of Arc real” every month! And the true, historical story of Joan is often called the “legend of Joan of Arc” by the non-religious.

From the French perspective, she was a cult hero and national saint long before her canonization in 1920—and only God truly knows why it took that long, though political hindrances would be a valid guess.

She was loved by Napolean who, in 1803, declared her a national symbol of France. A story from World War 1 also goes that several French soldiers, looking up at the sky during the fighting, swore that they saw Joan holding her famous banner.

In Catholic France, she is well-known for being a patron saint of France alongside Thérèse of Lisieux, the little flower as she is affectionately known, who even acted as Joan of Arc in a religious play.

And It Goes On…

Unfortunately, the liberal media of our time has shamelessly skewed the truth about Joan of Arc. Resultingly she has been seen as the prototype for many modern ideologies: the first feminist, the first Protestant, one of the first advocates of transgenderism (due to her wearing male armor), and so on.

If that wasn’t confusing enough, there are other facets of Joan’s personality that do strike one as contradictory.

She was—all at the same time—an illiterate female peasant, an ennobled dignitary, the youngest ever commander, more comfortable around soldiers than women at court, a perpetual virgin, a mystical visionary and saint, meek and mild, strong-willed and confident, often close to tears, a merciful victor, a juggernaut against the English, uneducated, a quick learner, an exemplary war strategist, untrained in theology, a menace to the Hussites and Muslims, a great debater, an expert diplomat, a bastion of common sense, a miracle-worker, possessing unswerving (borderline presumptuous) supernatural faith and, to top it all off, an excellent sewer by her own account.

“When it comes to spinning and sewing I fear no woman…”

With all these different parties wrestling for a fragment of her perceived personality, it’s perhaps difficult for even some Catholics to know the truth about Joan of Arc. But past the politics, scheming, and the impressive glam and glitter, we see a simple and pious Catholic girl.

A friend of Joan recalled 25 years after her death that she was, “So far as I could judge, an excellent Catholic, and a modest woman: she communicated often, and, at sight of the Body of Christ, shed many tears. In all she did, except in affairs of war, she was a very simple young girl”. Indeed, Joan may have possessed more lofty and esoteric traits too, but she was, in essence, “a very simple young girl”.

One must not also forget that Joan simply referred to herself as “the maid”, which in this context principally means a young, unmarried woman while also containing the subtler connotation of servanthood.

It is in this self-proclaimed title of Joan that we see how she defined herself: a virgin; a woman consecrated simply and purely to God.

Upon hearing the news that she was to be burnt alive the next morning, Joan made a fascinating remark: “Must this body, so far undefiled, now be burnt to ashes in a woeful death?” Her thoughts jumped to her virginity even during the last moments of her life.

A Certain Type Of Virginity

When Joan first experienced the heavenly visit of St. Michael, St. Catherine of Alexandria and St. Margeret of Antioch, she reported to her interrogators that she, “Vowed to remain a virgin for as long as it pleased God”. This may strike the reader as slightly strange in our hyper-sexualized world.

However, the link is plain.

St. Catherine of Alexandria and St. Margaret of Antioch were, themselves, two virgin martyrs who died in the 4th Century. Joan deeply loved them. In fact, she credits them for all her good deeds, “All that I have done well I have done by commandment of the Voices.”

How strange must it have been for Joan! Her local church, that stood just behind her own house, featured a statue of St. Margeret. I can’t help but wonder if it actually looked like her? After all, Joan would have known!

Joan’s own younger sister was called Catherine, which is more of a spurious link but yet highlights the inherent connection Joan had with these two saints—whether coincidentally or not. Regardless, Joan accepted their presence as an encouraging sign of her mission from God, her true life’s purpose.

“I must keep the vow and promise that I have made to Our Lord, to keep well my virginity of body and of soul.” – St. Joan of Arc

As I am sure is the case for other religious virgins, Joan’s virginity was an indelible sign of her pure call from God and went deeper than the surface level. For Joan, virginity meant remaining pure in every aspect of her life.

Perhaps, one wonders, this is why God entrusted this brutal mission to her and permitted her to witness such evil and bloodshed in her own life?

And, how striking is it that her passage into Heaven was through a refining fire—literally. As Mark Twain put it: “She rises stainlessly pure, in mind and heart, in speech and deed and spirit, and will so endure to the end of time.”

Therefore, how disheartening is it to see such impure distortions of her in our corrupted modern age!

The best definition of St. Joan of Arc is surely found in the “St.” that appears before her name. She is, first and foremost, a Catholic saint. And, so much so, aren’t we proud to be able to claim her as one of our own.

Let’s allow Joan to speak for herself in refuting these ridiculous claims that try to distort the truth:

The Truth About Joan Of Arc Is That: