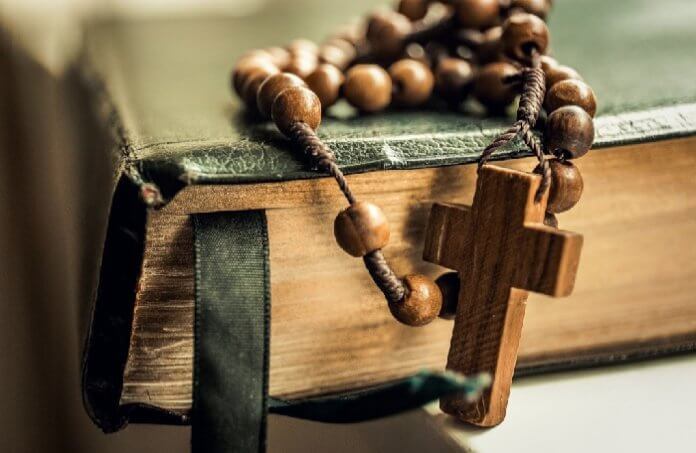 Ever since I converted to Catholicism from Protestantism I’ve had people ask, What’s the difference between Roman Catholics and Christians?

Overlooking the question’s weird phrasing (after all, Catholics are Christians), I’ve always been happy to answer.

In short, there are many types of Christians:

And since Protestantism itself is so varied, I’ll be focusing on its two biggest denominations: Evangelicals and Baptists.[1]

Baptists and Evangelicals agree with about 85% of Catholic teaching, but here are 12 key differences in beliefs…

Differences Between Catholics and Protestants

Catholics and Protestants differ in their approach to the Word of God.

These two differences arose due to the teachings of the 16th-century Protestant, Martin Luther.

Martin Luther removed the books of Tobit, Judith, 1 & 2 Maccabees, the Wisdom of Solomon, Ecclesiasticus, Baruch, the Letter of Jeremiah and additions to Esther and Daniel from the Old Testament.

In addition, he also popularized a new way of viewing the Bible.

Luther saw the Bible alone as containing the totality of God’s revelation to mankind while also being the sole authority to guide the Church and a Christian’s life.[3]

After his death, this view of Luther evolved to mean that all Christians can interpret and understand Scripture individually without the help of an authoritative Church.[4]

Meanwhile, the Catholic Church retained its 73-book canon and rejected the notion of Sola Scriptura.[5]

The Catholic Church believes its origin can be found in the words of Jesus to Peter in Matthew 16:18, you are Peter, and on this rock I will build my church.

It also believes that Jesus promised, through His Holy Spirit, to guide His Church into all truth[6] and make it the pillar of truth.[7]

Catholics see this truth as having been communicated orally as well as written down.[8]

Hence, oral Traditions that have their source in Jesus and are definitively taught by this Holy Spirit-guided Church have equal authority to the Bible.

This same Sacred Tradition, protected by the Holy Spirit, is also believed to have helped codify the Bible and help know which books should be included in it.[9]

Merely historical or cultural traditions that don’t have their source in Jesus are not considered as authoritative as the Bible. (This distinction is often shown through the capitalization tradition vs. Tradition.)

Protestants, while recognising the usefulness of some historical or cultural traditions (lowercase), do not believe in Sacred Tradition (uppercase) and so tend to see the Bible as a standalone authority that exists almost in a vacuum.

Both Catholics and Protestants believe in original sin (the human tendency to commit evil.)

Protestants such as Evangelicals and Baptists do not categorise sin into different levels, whereas Catholics distinguish between sins that lead to death and sins that don’t.[10]

These are called mortal and venial sins respectively and, in the case of mortal sins, can only be forgiven by confessing to a priest. (More on that difference here.)

Protestants typically see salvation as a past, one-time event when they accepted Jesus as their Lord and Saviour.

A lot of Baptists and Evangelicals don’t believe one can lose their salvation, and they believe this salvation comes through faith alone.

Catholics see salvation as a past, present and future event that they can potentially squander and must work out until death.[11]

They believe a person is justified by works and not by faith alone.[12] Not in the sense that they must do good works in order to be forgiven, but that they’re saved by an active faith that is formed by love and which is not an unconditional “golden ticket” to heaven.

Other groups of Protestants would also agree with this view. 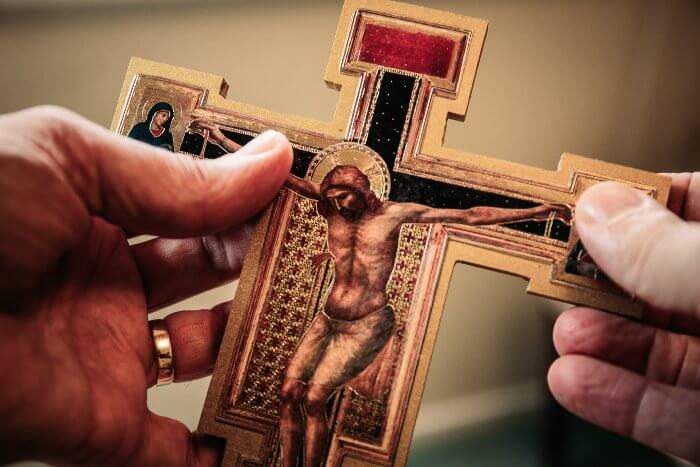 Protestants typically interpret the cross as Christ sacrificially allowing the Father to punish him as a substitute for mankind’s sin.

Catholics, taking inspiration from St. Anselm’s writings in the 11th-century, typically interpret the cross similarly but replace the language of punishment with obedience.

In this view, the cross was Jesus’ restitution or satisfaction for mankind’s sin by His perfect obedience to the Father’s will.[13]

This type of language is also expressed in Philippians 2:8: He humbled himself and became obedient to the point of death—even death on a cross.

Catholics and Protestants believe in heaven and hell as two possible places people go after death.

Catholics also believe in an intermediary state called Purgatory where righteous people go temporarily to be fully purified and to finish making reparation for the temporal punishment due to sins.[14]

Note: while the eternal punishment of sin was forgiven at the Cross, temporal punishments for sin still remain.

Protestants such as Baptists and Evangelicals emphasise a personal relationship with Jesus that is communicated entirely heart-to-heart.

They also sometimes see the external rules and rituals of Catholicism as stifling that heart-to-heart relationship.

Catholics also believe in a heart-to-heart, personal relationship with Jesus, though one that blossoms and is kept safe by the help of Christ’s Church and sacraments.[15]

Catholics believe the bread and wine, under the action of the priest, substantially become Jesus’ body and blood.[16]

For this reason, Catholics consider the Eucharist the centre of the Christian life and offering it the highest form of worship to God.[17]

Most Protestants such as Evangelicals and Baptists believe that the bread and wine in Holy Communion are only symbolic of Jesus’ body and blood.

Because of this symbolic view, their highest form of worship is praise music or the preaching of the Bible, and they see the Eucharist (i.e. the Lord’s Supper) as simply a way to remember Jesus’ sacrifice.

Baptists and Evangelicals don’t believe in a specific New Testament priesthood but think that all believers are priests in a general sense.

While Catholics agree with this general sense, they also believe in a specific priesthood that started with the Twelve Apostles and was passed down through the centuries.[18]

This is called the doctrine of Apostolic succession, which some Protestants such as Baptists and Evangelicals reject.

Catholics believe Peter was the chief Apostle who was given special authority by Jesus.[19]

At the time of his death in Rome, it’s believed Peter passed on his authority to a successor, who then at death passed it on again to another successor, and so on.[20]

And so for Catholics, the current Pope is a direct successor to Peter and shares his authority.

While Protestants such as Baptists and Evangelicals more-or-less agree that Peter was the chief Apostle, they don’t typically believe in Apostolic succession.

Hence, they do not believe Peter has a living successor.

Protestants (especially Baptists and Evangelicals) usually see Mary simply as a devout woman chosen to be the mother of Jesus.

Whereas Catholics believe that Scripture and Tradition also teach she was a perpetual virgin, immaculately conceived, assumed into heaven, and coronated the Queen of Heaven too.[21]

Some Protestants such as Evangelicals like to call all baptised Christians saints.

Catholics recognise the validity and biblical-origin of this language though aren’t prone to use it since it has become a title in the Catholic Church.

Saint (with the uppercase S), is a title normally only ascribed to canonized saints that the Church have investigated and found worthy of imitation.

Moreover, Protestants don’t usually ask deceased saints to pray for them as Catholics do, with some even considering it idolatrous.

Please note that this was a basic introduction to these real (and sometimes contentious) differences between Catholic Christians and Protestant Christians.

So, what do you think? Feel free to express your thoughts in the comment section!

2. Up to this point we have had to do with the true and certain chief books of the New Testament. The four which follow [i.e. Hebrews, James, Jude and Revelation] have from ancient times had a different reputation. — Martin Luther’s preface to Hebrews. ˄

3. A simple layman armed with Scripture is to be believed above a pope or a council without it…neither the Church nor the pope can establish articles of faith. These must come from Scripture. — Roland H. Bainton’s book Here I Stand, page 117. ˄

4. …most Protestants have adopted a subjective and individualistic version of sola scriptura that bears little resemblance to the doctrine of the Reformers. — Keith A. Mathisons’s introduction to The Shape of Sola Scriptura, pages 13-14. ˄

5. Decree Concerning the Canonical Scriptures from the 4th session of the Council of Trent. ˄

8. 2 Thessalonians 2:15 and the Decree Concerning the Canonical Scriptures from the 4th session of the Council of Trent: …seeing clearly that this truth and discipline are contained in the written books, and the unwritten traditions. ˄

9. It is clear, therefore, that sacred tradition, Sacred Scripture and the teaching authority of the Church, in accord with God’s most wise design, are so linked and joined together that one cannot stand without the others. — Dei verbum, chapter 2, point 10. ˄

13. Anselm did not teach penal substitution. Yes, he brought to prominence the vocabulary of ‘satisfaction’, which became important in later formulations. But in Anselm’s feudal thought-world, it was God’s honour that needed to be satisfied by substitutionary obedience, not his justice by substitutionary penalty. — Response to N.T. Wright’s criticism of Pierced for Our Transgressions from the authors. ˄

15. The seven sacraments touch all the stages and all the important moments of Christian life: they give birth and increase, healing and mission to the Christian’s life of faith. — Catechism of the Catholic Church, paragraph 1210. ˄