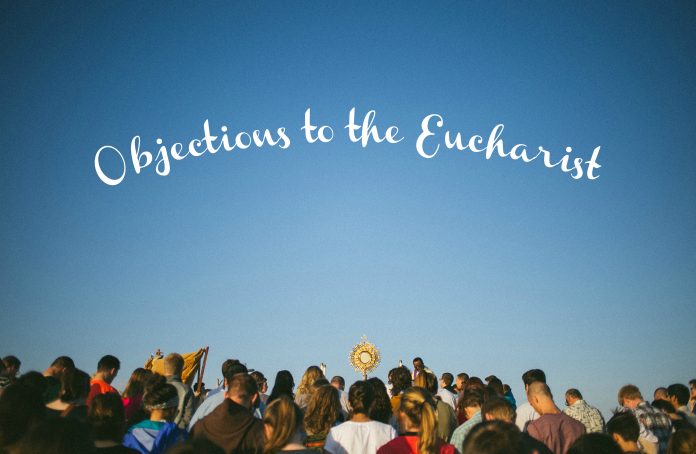 Here are some of the actual objections we have received from Protestants regarding the Mass, and our responses in turn:

Jesus suffered once and once only. Romans 5:12 tells us that, through the sin of Adam, sin entered the world and because of that sin came death. Death passed to all mankind because of Adam’s sin. Jesus died once on the cross—the victory of Satan over Jesus, albeit a temporary victory—that Christ might become obedient to death on our behalf. God could not look upon his much-loved Son as he bore our sin. To re-create the body and blood of Jesus in the Mass (as Roman Catholic’s must believe) is to celebrate Satan’s victory over Jesus.

Forgive me if I’m wrong, but underlying this argument is the understanding that Catholics believe that Christ is re-sacrificed at every Mass. However, this is contrary to what the Catholic Church teaches. In paragraph 1330, the Catechism of the Catholic Church states that the Mass “makes present the one sacrifice of Christ the savior”. In other words, at Mass the once-for-all sacrifice of Christ at Calvary is not repeated—rather it is re-presented. When a Catholic goes to Mass they are, in a mystical sense, at the foot of the cross. Malachi prophesizes about the sacrifice of the Mass in Malachi 1:11: “For from the rising of the sun even to the going down, my name is great among the Gentiles, and in every place there is sacrifice, and there is offered to my name a clean oblation: for my name is great among the Gentiles, saith the Lord of hosts.”

The second thing about your argument that I disagree with is your understanding of Christ’s death; you argue that Satan temporarily defeated Christ on the cross. I would argue that it is precisely in Christ’s death where Satan is defeated. In fact, I would argue Satan did not want Christ to be killed. In Matthew 16, Peter tries to persuade Christ not to go to Jerusalem after Jesus has told him that he must go to suffer and be killed. Jesus’ response to this is very intriguing: “Get behind me Satan! You are a stumbling block to me” (Matthew 16:23). Satan is working through Peter so that Jesus does not die. This contradicts the idea that Jesus’ death is a satanic victory.

When Jesus first instituted the Last Supper, he didn’t break off a finger and say, “This is my body”. In fact, he broke a loaf of bread. Would he not just have given them part of his body had he really wanted to? Likewise, could he not have opened a vein and let out some blood into a cup and invite His disciples to drink real blood? No! This is symbolic. Bread and wine symbolize the whole life of Jesus. His death, his resurrection, and ascension into heaven.

I believe in the real presence of Jesus in the Mass. There are a handful of reasons why I hold this position. In John chapter 6, Jesus is explicitly clear about the real presence of the Eucharist. After comparing himself to the manna bread in the Exodus, Jesus continuously refers to himself as the bread of life. In verse 51, he says “I am the living bread that came down from heaven. Whoever eats of this bread that will live forever; and the bread that I will give for the world is my flesh”. In the following verse, we learn that the Jews argue among themselves. It is clear how they interpret Jesus’ words; they believe he wants them to eat him. That is why they say, “How can this man give us his flesh to eat?” (John 6:52). Jesus does not rebuke their understanding. He actually does the opposite and affirms their understanding by saying in John 6:53-59,

“Very truly, I tell you, unless you eat the flesh of the Son of Man and drink his blood, you have no life in you. Those who eat my flesh and drink my blood have eternal life, and I will raise them up on the last day; for my flesh is true food and my blood is true drink. Those who eat my flesh and drink my blood abide in me, and I in them. Just as the living Father sent me, and I live because of the Father, so whoever eats me will live because of me. This is the bread that came down from heaven, not like that which your ancestors ate, and they died. But the one who eats this bread will live forever.”

Jesus has made his point crystal clear. We are to eat his body and drink his blood. This would have been very difficult for a Jewish audience. Over and over again in the Law, it is written that drinking blood is forbidden because “the life is in the blood” (Leviticus 17:11). However, Jesus seems to be using this to make his point even clearer. He states in John 6:53 that, if we don’t drink his blood, we have no life. Whereas you cannot drink the blood of the old sacrifices because the life is in the blood, we are to drink Jesus’ blood in the new covenant because the life is in the blood, and we receive his life! Other people use different arguments. For example, Protestant reformer Martin Luther strongly believed in the real presence of the Eucharist. He would strongly defend its authenticity by stating that Jesus himself said: “This IS my body”. According to Luther, you cannot get away from that fact.

Moreover, when I first started to read the early Church Fathers, I was challenged by how clearly they taught the real presence of Christ in the Eucharist. They saw the real presence as a crucial doctrine and, in actual fact, its authenticity was not fully questioned until Huldrych Zwingli in the 1500s. That is a very long time after Christ and so begs the question of why God would have allowed His Church to have gotten it so horribly wrong for 1500 years. The implication of this is extremely problematic for Protestants. If the Church got this wrong from the earliest days up until the 16th Century, then how do we know they didn’t get other doctrines wrong, such as for example, deciding which books should be in the Bible? There were many books that were rejected as heretical by the Church because they did not agree with what the Church was teaching. There’s no reason to trust that the Church was 100% right about the canon of Scripture, but 100% wrong about the real presence of the Eucharist—there is no reason (other than arbitrary) to believe this. You cannot argue this from Scripture, because that is building your whole argument on the assumption that the right books were compiled and canonized. In other words, you would be assuming what you are trying to prove. Let’s see what the early Christians—those who lived in the same context as Jesus and who knew the disciples themselves—say about the Eucharist?

Ignatius of Antioch, in 110AD says, “Take note of those who hold heretical opinions on the grace of Jesus Christ which has come to us, and see how contrary their opinions are to the mind of God. . . . They abstain from the Eucharist and from prayer because they do not confess that the Eucharist is the flesh of our Saviour Jesus Christ, flesh which suffered for our sins and which that Father, in his goodness, raised up again. They who deny the gift of God are perishing in their disputes” (Letter to the Smyrnaeans 6:2–7:1).

Ignatius also writes, “I have no taste for corruptible food nor for the pleasures of this life. I desire the bread of God, which is the flesh of Jesus Christ, who was of the seed of David; and for drink I desire his blood, which is love incorruptible” (Letter to the Romans 7:3).

Justin Martyr in 151AD says, “We call this food Eucharist, and no one else is permitted to partake of it, except one who believes our teaching to be true and who has been washed in the washing which is for the remission of sins and for regeneration [i.e., has received baptism] and is thereby living as Christ enjoined. For not as common bread nor common drink do we receive these; but since Jesus Christ our Saviour was made incarnate by the word of God and had both flesh and blood for our salvation, so too, as we have been taught, the food which has been made into the Eucharist by the Eucharistic prayer set down by him, and by the change of which our blood and flesh is nurtured, is both the flesh and the blood of that incarnated Jesus” (First Apology 66).

Irenaeus in 189AD writes, “If the Lord were from other than the Father, how could he rightly take bread, which is of the same creation as our own, and confess it to be his body and affirm that the mixture in the cup is his blood?” (Against Heresies 4:33–32).